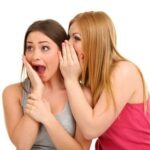 Gossiping, talking about people behind their back, is the cause of a lot of misery. It creates an incomplete picture of reality and leads to misunderstandings. This is a serious form of miscommunication because the consequences are huge. It creates distance between people! When someone believes whatever someone else says, the wrong picture is formed. If the other person doesn’t have the chance to correct that picture, the first wedge has been driven.

Were you raised on gossip?

I myself was raised in a gossiping environment. It was very normal to talk about other people behind their backs and preferably negative and exaggerated. With as culmination that people gossiped about me while I was right there. I was 13 and two aunts sat in the garden, a few chairs away from me. “No, she doesn’t have much of a rack yet.” “Oh well, she will have to make the best of what she’s got.”

How bad is it when people gossip?

Not until much later, when I was grown up myself, did I realize that this isn’t normal at all! Speaking badly about someone else is a form of violence. And maybe the worst kind. It’s namely an invisible form, one from which you can’t defend yourself. In schools and work situations, people are often bullied. The source of this bullying is gossip and malice. In many group cultures, it’s normal to make another person look bad. Openly disapproving of someone’s behavior, or even worse: twisting the facts around.

What two reasons are there to gossip?

Gossip out of habit: What moves people to gossip and speak badly? When I thought about this, I came to a shocking conclusion: people gossip because they are used to it. They don’t know any better and gossip because everyone does it. What else is there to talk about?
Gossiping because of insecurity: In addition, gossiping is an attempt to make yourself appear stronger. Gossipers themselves are insecure. To win allies for themselves, so they can belong to the group, they make others look bad and put them down. This makes them more important. Or so they think.

How do you stop gossiping?

Gossip is a form of communication that can disappear. For that, you have to first become aware that you gossip. What do you actually say when you talk about someone else? Is it positive or negative?

The MIR-Method helps with this

With step 3: “Detach father. Detach mother” you detach yourself from your family’s habits. If you grew up in a family that gossiped about each other, where speaking negatively about each other was normal, you will let go of this. You detach yourself from the culture and it becomes easier for you to not take part in it anymore but to choose more positive, uplifting words.

With step 7: “Fulfill basic needs” it becomes easier to function as if looking into a reflective mirror. “What you don’t want someone to do to you, you don’t do to the other person.” You continue to build on your inner leadership with “Security”, “Trust” and “Protection”. People who rediscover their inner leadership, don’t need to put other people down but can stand next to them, in harmony.

There is another possible way to talk about each other: via “positive gossip”. I always like doing that. You talk about someone who is not there but in a positive way. “Do you know what I heard about her? That she inspires so many people during flower arranging. She tells such wonderful stories while doing this!” I really like this! And in this way we can give each other a better environment to live in! It’s really very easy!

And you? Do you recognize this? Is it easier for you to not gossip? Please let me know about it below. Thank you!
By using the “End” key on your keyboard you can go straight to the form. Personal questions should always be asked of a MIR-Method coach!

My wish for you is wonderful inner leadership!
Mireille Mettes

P.S. Help me spread the MIR-Method around the world! Use the icons to the left for Facebook, Twitter and Linked-in. Thank you for forwarding the article!

P.S. You don’t know the MIR-Method yet? It’s a free healing method. Go to the home page: www.mirmethod.com  Look at the video to understand why it’s free. And look at the complete instruction video. Subscribe to the newsletter and the 6 weeks guidance emails for extra support and understanding of the method!