↓
Home » Articles » 61. People are Inspirers: Are You Already Crazy Enough? 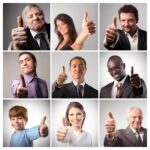 People are inspirers. They influence each other, encourage each other and give each other hope. Yes, I know that it’s usually the other way around, but I’d like to let you look at a very special phenomenon. And that is that one phrase. That one golden statement that can determine your life. That causes you to make the decision of a lifetime!

What would you do?

A high school teacher brought me home after a course. I had taught a course in stress management. He told me that he had already had problems with the management for 40 years, and asked what he should do. My father was also a teacher, but had already died at that point. I said something like, “If my father were still alive, I would hope that he would have the courage to let go of the school”. The next week, the man quit his job.

What happens when an unassuming person gives her opinion?

A friend of mine, who usually always kept her opinion to herself, was very nervous when she said, “I’m only going to say this once: it is not your fault!” It gave me sudden clarity about the complex relationship I was in. I could suddenly see it clearly and ended the relationship. I thought the whole time that the arguments were my fault.

What happens when parents say a golden sentence to their child?

Parents can also say the kind of statements that remain with you your life long. One father said to his adult daughter: “I wish that I had been as far along as you are now when I was 40”. He wasn’t usually generous with compliments, but when he made that statement, it was like her heart was filled with pure love.
Another father once said to his daughter when she was young: “Whatever your hands touch turns to gold”. It stuck with her for the rest of her life.

What is the strength of these golden statements?

This type of statement is worth gold! Because usually people are not so used to speaking so kindly towards one another. Encouraging and stimulating each other are uncommon. It’s more common to point out each other’s mistakes than to speak with each other about what we do well. And that is exactly what we can change. Because these golden statements have one great advantage: they have a huge impact! Because we so often hear negativity, that one golden statement really hits us! We cherish that type of phrase as if they were our greatest treasure. They nourish us, giving us courage and hope.

What do these golden statements have in common with the MIR-Method?

One of the effects of the MIR-Method that I often hear about is that people develop more self-confidence. How that happens, is explained in article 28. It means that you have more confidence in your own opinions and become more courageous in giving your opinions. If someone asks you for advice, it could just be that you make a golden statement that changes the life of the other person forever!

Are you already crazy enough to change the world?

For me, world inspirers are Aung San Suu Kyi (leader of the non-violent human rights movement in Burma), Marianne Williamson and Lynne McTaggart. The statements they make inspire me to persevere my work with the MIR-Method. They help me to have hope for the future. I believe, thanks to them, that we humans can create a fine world! And what about the golden statement Steve Jobs made, co-founder of Apple computers: “The people who are crazy enough to believe that they can change the world, are the ones who do”.

What golden statement inspires you? Gives you courage or hope? Do you notice that you have the courage to give your opinion more often through the MIR-Method? Please let me know below! Thank you!
Personal estions should be asked of a MIR-Method coach!

P.S. Help me spread the MIR-Method around the world! Use the icons to the left for Facebook, Twitter and Linked-in. Thank you for forwarding the article!

P.S. You don’t know the MIR-Method yet? It’s a free healing method. Go to the home page: www.mirmethod.com  Look at the video to understand why it’s free. And look at the complete instruction video. Subscribe to the newsletter and the 6 weeks guidance emails for extra support and understanding of the method!