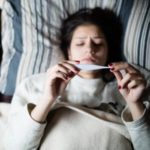 “Good for him. He had a fever but kept on going anyway! What a tough guy! Respect!” Got a bad cold but do you go to work anyway because they need you?! Or because you can’t let other people down? Your child is sick; home one day, and then the next. The third day your child’s fever is gone. ”Time for school. Your fever is gone,” we say. These are strange habits. They just crept in. We have to keep going because being sick is inconvenient. Because we view being ill as being weak. We don’t want to accept it. The problem is that the people that don’t take time to get better only make it worse for themselves.

People find it difficult to say they are sick, that they need rest. Some supervisors try to talk you into working. Yes, talk you into it. They make you feel guilty, speak to your sense of duty and before you know it, you’re working again, going past your own limits. But some people do it to themselves. They are needed; they don’t want to disappoint their clients. And they go beyond their own limits. No, it’s better to be legally sick. Then it’s a matter of time. The person who ignores the first signs of ill health and doesn’t rest ends up developing something that really matters. And then you can finally be legally ill because the doctor said that you have to stay home. You get pneumonia because you didn’t recover from the flu (6 weeks), you break a bone because of fatigue (6 weeks), or you have a burnout (6 months or longer) by constantly going past your own limitations and working yourself to the bone.

If an animal is ill, what does it do? It goes into a corner and lies there. It eats little, drinks little, and sleeps a lot. We people begin to worry about them. Is your pet all right? Normally it is active and energetic. And now? It’s miserable. It doesn’t move or want to. You have to control yourself to not run to the vet right away. The vet’s bill is always high so people think twice about going. And what often happens? After a few days, your pet gets better. It’s fine. Happy, and alive and kicking! What was your pet doing then?

The best remedy for illness

Animals know how it works. When you are sick, you need to rest! Just lay still, don’t move much, don’t each much and sleep! Rest, rest and more rest. What do people do when they feel sick? They keep on going, and take pills. Ok, maybe go to bed a little earlier, but in the morning you drag yourself out of bed and begin your daily routine. We don’t have time anymore to be sick! What! No time to be sick? That is the worst thing you can do! What does being sick mean? Being sick is usually a process of conclusion. Your body has been through something, a long period of stress or an extreme event such as someone passing away or being fired, for example. You kept on working for a while after that, through sheer determination. People can manage that for a long time! Until it’s gone and your body takes over and says, “Enough is enough! Stop!”, and you get sick. The only thing you can then do is rest.

I worked for a while with a woman in Germany. She had just handed her business over to her successor. Eczema developed on her hands. Her primary care physician decided to send her to a sanatorium for two whole weeks! She enjoyed it. She was pampered, rested and her eczema disappeared. I was pleasantly surprised. The Germans get it! When someone has physical complaints, they need rest! We need sanatoria, houses to rest!

If you do the MIR-Method, you are working on every aspect of your health. And yes, it’s possible that your body says, “Enough! Relax!” and that you become ill. This is one of the arguments I hear for not doing the MIR-Method. “I don’t want to get sick!” Try to see it as a healing process. Your body wants to work something out, cleanse itself, and deal with something. Then it’s a huge blessing to stand still and surrender to your body. Moreover, if you don’t take a step back, the problems will eventually only get worse.

Step 9: Clarify mission puts in its own word. If you are working in an environment in which you are unhappy, your system will work very hard to get you out of that environment. By making you sick, for example. It forces the issue.

And… maybe your mission is setting up a sanatorium? What kind of people would that take? A leader with a bold vision for the sanatorium. Encouragers who support the plans and help to make other people become enthusiastic. People who can help finance a building. Organizers who set up the right structures so the organization runs well. People who can make this happen in no time and can take care of furniture, computers, websites, etc. People with an eye for beauty and details so people will feel at home in the sanatorium.

And for taking care of people, listeners who can completely be there for someone else. Listening speeds up healing. Cleansers who can help people cleanse themselves more quickly, physically but also in terms of energy. Healers, who can give extra counseling during the recovery period with energy, sound or massage. Caregivers who make sure these people have everything they need.

With an increasing number of large buildings now becoming vacant, I see these sanatoria rapidly proliferating. But that is me being a visionary. Seeing the possibility of them arising is not the same thing as them really doing so. It demands the work of people to make this come true.

Do you feel like contributing to this? Please write about it below! And also about which role you would like to fulfill in a sanatorium. Where should a sanatorium be placed? Who knows what wonderful initiatives can result from this!

I hope that it becomes normal again to rest while ill!
Sincerely, Mireille Mettes

P.S. You would do me a big favor by spreading the MIR-Method to others by posting this article to your Facebook page or forwarding it via e-mail, Twitter or Linked-In! Use the icons on the left-hand side! Thank you!