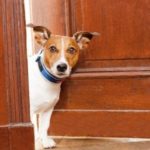 Coming home should be nice. Coming home to your own, familiar house. To the people who love you and are focused on you. Still, there are many people who are not familiar with this. Who went home reluctantly, worried about what they might come across there. Maybe there was a mother who was often sick, an aggressive father or an older brother or sister who liked to bully. Or, there was the absence of people. Maybe there was a huge amount of household chores to be done because a father or mother was missing. Maybe the child had to carry responsibility that a child shouldn’t have to. Or, always watchful for unexpected situations. Not just once, but repeatedly, sometimes for years.

Do you have problems because of an engram?

People who find it difficult to enter a place often have an engram. That means that they are reminded of something similar and that’s now in their way. For example, people who lived in an unsafe family. When they were young, they had to be on guard. They came home, walked to the back door and had to force themselves through a wall of fear and apprehension. “What is waiting for me?” “Is it safe?” “Do I have to be on guard?” “In what state will mother be?” “Is my father home?” “Should I make myself invisible?” It was a world of fear the child had to go through and which repeated itself every day.

What is an engram?

In Neuropsychology, the term “engram” is used to describe a spot in the brain where something is “etched” into it. Up till now, they haven’t been able to say where exactly this is in the brain. It’s a fact that people can suddenly be reminded of something by seeing something. They go, for example, for the first time to choir practice, but before they get through the door, they feel such an intense wall of fear that they turn around and leave. The idea of having to go inside, to a group of people, causes them intense fear, just as they once had when they came home from school.

Such a memory can really bother someone. It can cause apathy and fear of the unknown. People can close themselves off from other people and never take part in new situations. It’s possible for someone to lose all trust in other people, such as family members.
If you’ve got such unexplainable feelings of nervousness, which are too strong for the situation at hand, it’s possible that you’ve got such an engram. If you don’t do something about it, it will continue to bother you. If you deal with it, you can slowly erase such an engram. That’s possible via therapy if it is a serious problem for you, and otherwise you can deal with it via the MIR-Method. You erase the memory layer for layer, causing the fear to diminish. Read about it, for example, in article 12. Fear, What a Weird Emotion!  It becomes easier to approach new people or to visit family members. If you want to guide yourself in a scary moment, you can also consider using the first aid of the MIR-Method. You will find it in the additional techniques webinar.

Do you recognize this as well, that you have become freer in certain situations by doing the MIR-Method? That it is easier for you to go somewhere? How long before this did you do the MIR-Method? I’d love to hear about it from you!
By using the “End” key on your keyboard you can go straight to the form. You should always ask a MIR-Method coach about personal questions!

My wish for you is that all bothersome memories may disappear so you can feel free again!
Greetings, Mireille Mettes

P.S. Are you not yet familiar with the MIR-Method? Please go to the homepage: www.mirmethod.com. You can watch the video there and also the instruction video. Register on the homepage to receive the newsletter and 6 weeks of coaching e-mails for extra support!